Before I start the course, I want to tell you a true story.

He wanted something more with his life.

Jack with his wife, Moana, and their kids.

He no longer enjoyed working 14 hours every day for something he was no longer passionate about and never having any time with his family. He missed most of his son's basketball games and hadn't gone out for dinner with his wife Moana in almost an year.

Like many of our Easy TV Money members, he bought my course and dozens of other WSOs since 2011 from the WarriorForum but never really did anything. He would start several projects at the same time but they would ever get anywhere.

Like many of our email subscribers, Jack read all of my emails but he never reached out. When I launched my Long-Term Business Coaching Program in May 2015, however, he decided to join the Program. His goal was to build an online business so he didn't have to work 14 hours a day, 7 days a week like he had been for the past 27 years.

How did he do that?

You will find out EXACTLY how I helped him build his highly profitable affiliate review business in my 3-part free video course How to Build a $17K/mo Affiliate Review Site in 30 Days.

This is an in-depth video course that's about 2 hours long. This is Part 1 and it's 32 minutes long:

Please check back tomorrow for Part 2 of the video course.

P.S. Win a one-hour free coaching call with me by posting your comment or question below. I will announcement the winner here and through email.

This is a true story, and I am not disrespecting electrical technicians or any labor workers here. My mother was a labor worker her whole life. I chose this story because I wanted to show that you do NOT need experience to build a successful online business. All you need is determination, resourcefulness, and maybe a little bit of help.

BUILD A BUSINESS THAT CAN LAST 20+ YEARS

Get my proven system to building a business that will last:

Now You Can Blog from Everywhere! 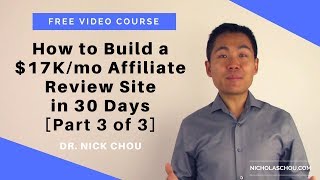